The Crucible, AKA the Walmart Supercenter

I spent the last week or so trying to come up with some earth-shattering, amazing topic to blog about while juggling deadlines for two books and a bunch of side projects. I finally decided the heck with trying to impress people, I’ll just be myself. If they’re still here afterward, then I’ve found my tribe.

I’m a mother of five boys. Three are grown, two are at home. I have an adult son with high-functioning autism who recently moved back in, and my youngest most likely is in the spectrum as well, he just hasn’t had a formal diagnosis yet. I called last spring for an appointment and won’t be able to get him in till next year.

All in all, I’ve spent over 20 years dealing with autism, special education, and everything that goes with it. There was one week where I had my older son’s last IEP meeting and my youngest son’s first one. I cried when I realized I’d been doing it for 16 years at that point, and had another 16 ahead of me. It’s been a LONG road.

I also have a husband with head injuries. I didn’t know that when we met; I thought he was just an extreme introvert (I guess opposites attract.) The hubs has some massive OCD and sensitivity to light and sound The two kids on the spectrum are like hurricanes when they blow through a room: noisy and messy. I’ve never seen such total destruction in my life.

Life is never boring, ever. Keeping the peace and helping everyone manage their issues without triggering each other is a full-time job. I spend a lot of time playing traffic cop or director of the insane asylum, I’m not sure which. I just know I’m exhausted some days.

I write humor because laughter is cheaper than therapy and doesn’t carry a prison sentence. I haven’t gone to jail for telling bad jokes yet. I love Jesus, but I swear sometimes, too. I was in the Army for a while and it just pops out and to be honest, it feels damned good!

So instead of some brilliant, deep, insightful blog post, I bring you my version of reality: Adventures with Kim.

Mission: Jamie, my six-year-old, needed some form from school stating he can see or they’ll boot his little hiney out of kindergarten.

So off to the Supercenter we go!

Upon arrival, the first thing he saw was this damned blowup dragon. 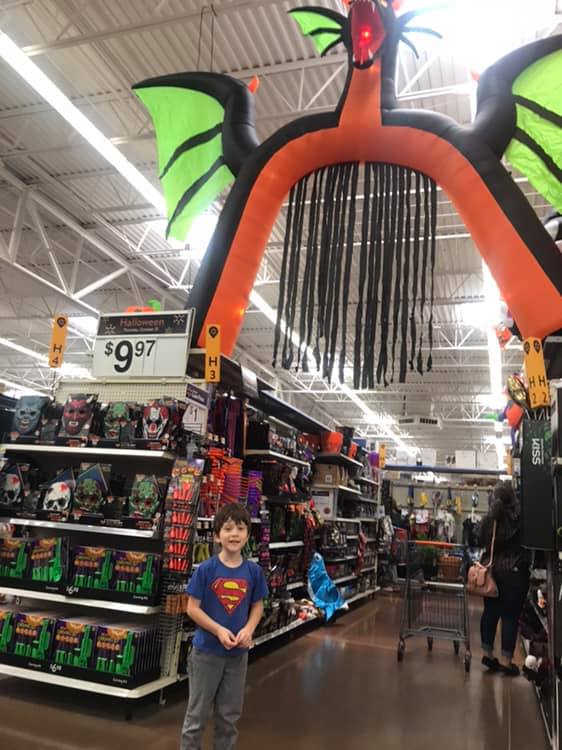 His little baby blues grew as big as saucers. He stared at it, transfixed, from the waiting area of the eye center and refused to cooperate with the eye technician until he could admire the dragon up close, proving that his eyesight is totally fine!

So we left and ogled the thing for a while and came back much calmer. Then he had to go to the bathroom which, of course, is just past the game center (those brilliant marketing bastards!)

We wove past all of the blinking lights and noises, to find a waiting line full of old ladies in the restroom. I felt like one of my poor characters that I love to torture so much. (Be careful what you write–Karma really is a b*tch!)

We finally got the little guy’s business taken care of and bumbled through the eye appointment. I showed him how to put his head into the chin rest for the big eye machine thingie, and pointed to the eye board as he called off the pictures he saw.

Jamie did pretty well, considering his challenges with the spoken word. (I swear God has a sense of humor. He has filled this word lover’s life with people who have language and reading issues.) The doctor was patient, but not used to his challenges and had a thick accent that he couldn’t understand.

All this to get the much-treasured form stating what I already knew: my special needs kid has perfect vision.

It’s experiences like these that remind me why I dislike going out in public. Maybe it’s just too many years of parenting, I don’t know. The whole ordeal felt like an obstacle course or some form of torture, though it could have been far worse. Now I’m ready for a nap, a drink, or both! The struggle is real.

Instead, I’m diving back into writing about chickens and Supers and a ton of other things. See you on the other side!

PS. What’s your craziest experience out in public with your kids? Share in the comments below. I’m sure we’d all love to hear that we’re not alone!